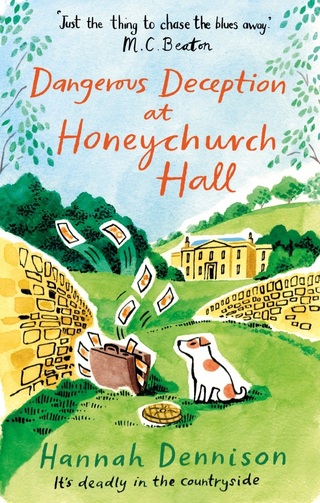 Kat Stanford recently relocated to the Devonshire countryside to keep an eye on her mother, Iris. She has even started dating Lady Lavinia Honeychurch's eccentric brother, Piers Carew. Her antique business is finally expanding despite a brewing rivalry with the impossibly beautiful, Cassandra Bowden-Forbes.

But it's not only in the antique world where the two women are rivals. Since birth, Cassandra has been betrothed to Piers (who is smitten with Kat). Meanwhile  Detective Inspector Shawn Cropper is another of Kat's admirers.

Kat's mother Iris has befriended the latest housekeeper at Honeychurch Hall, former Army wife Delia Evans, who must keep her drinking problem and prison time a secret from her new employers. Complicating her efforts is the fact that the magistrate who presided over her case, Lord Aubrey Carew, becomes a regular visitor as his romance with Iris blossoms. Iris begs him to keep their relationship under wraps; after all, she was only widowed 18 months earlier and Kat would certainly disapprove.  The implications of their various romances coming to fruition is too much for her to bear.

Unfortunately, Aubrey and Iris's romance ends as quickly as it begins when Aubrey—a staunch environmentalist—suffers a fatal fall whilst inspecting a notorious fly-tipping dumpsite on the Honeychurch Hall estate.

But Aubrey's fall was no accident.

The tension increases just prior to the Dartmouth annual BearFest, where Kat is the featured keynote speaker. She meets Major Timothy Green, a disabled war veteran, to value his trio of World War I mascot bears. Kat is certain that they are copies, but Cassandra declares that they are, in fact, the real deal.

Kat's popularity takes a disastrous dive. She is accused of "granny farming" in an incident caught on an iPhone. It soon goes viral. Things go from bad to worse soon after when Kat she finds the Major dead! She learns that a witness claims to have seen her at the dumpsite prior to Aubrey's fall and at the Major's home just hours before his death.  Several bags of fly-tipped household rubbish look as if they belong to her. Someone must be out to frame her.

But who? Since Cassandra has concrete alibis on all counts, suspicion falls on Delia, whose secretive behavior and penchant for wearing wigs makes her the obvious suspect. Then there's the mysterious stranger spotted living in his car on the Honeychurch Hall estate, and the drivers of the unmarked white van seen fly-tipping in the dead of night. A series of events make Kat wonder if she's the scapegoat … or a target?

At the last moment, Kat discovers that Cassandra had been meticulously planning her demise for months. As Cassandra's sanity rapidly unravels, Kat makes the terrifying discovery that her gorgeous rival will do anything – including murder – to become Piers's wife.